For the most part, a lot of people use running in order to reduce excess body fat that has been accumulated over the years. But as many runners know, the more you run doesn’t necessarily equate to losing the body fat you wish. Many runners find themselves running constantly with almost no impact on their physical appearance, finally getting discouraged and blaming their plight on their poor genetics. This is fortunately not the case, and you simply need to approach running in a different way in order to achieve the results you desire. 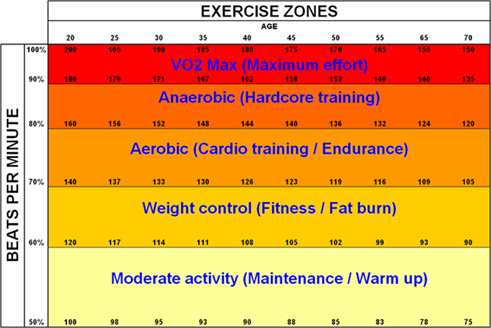 If you’ve ever used a piece of cardio equipment at the gym you may have noticed the graphic on the machine that denotes a difference between a “cardio zone” and a “fat burning zone” depending on what heart rate you achieve. This was a popularized by the manufacturers of the cardio equipment after the discovery that our body uses fat as the source of fuel at lower heart rates and uses carbohydrates as the source of fuel at higher heart rates. Obviously, for the individual trying to reduce the amount of physical body fat they carry, it is optimal for them to stay in the range where fat is being used instead of carbohydrates.

The issue of why your body uses the different fuels at different heart rates is very important to understand if one is to consistently lose weight through running. The focus shouldn’t be on the heart rate per se, but rather if you are in a state of oxygen abundance (breathing normally) or oxygen deprivation (breathing heavily). When the body is oxygen abundant, fat is used as the primary source of fuelling motion. This is because fat requires proportionally more oxygen in the metabolism process in order to be the preferred fuel for the muscles. Carbohydrates, on the other hand, require proportionally less oxygen to metabolize and will be used solely in an oxygen deprivation state. Every time you start to breath heavily, know you are switching from fat as fuel to carbohydrates as fuel at the cellular level in the muscle.

Using carbohydrates as fuel is problematic for the individual trying to lose weight through running because we do not carry excess carbs around as body fat, for the most part. Excess carbohydrates are stored in the muscles themselves and the liver as the useable form of carbohydrate fuel called glycogen. When an individual engages a running regiment with the hope of losing body fat, while running in an oxygen deprived manner (breathing heavily), they will simply be burning all the excess glycogen stored in the muscle and liver. This will not be effective if the goal of the running was to burn physical body fat. The result of a running session at a high heart rate will be a body that depleted internal glycogen and is now ravenously hungry for carbohydrate sources in the next meal. This can send a person down a difficult to manage cycle where the body is constantly depleting and repleting glycogen through wild swings in hunger and satiety.

To avoid the hunger cycle, and to really dial in the focus on burning fat, it is important to keep your running regiment at a level where you aren’t breathing too heavily. If you find yourself breathing too heavily, stop and start walking until your breathing subsides and then continue running again. Most people have an almost biological imperative that states “more work = more burned fat”, but this isn’t the case. In order to combat this natural tendency to want to work hard to burn body fat, a solid understanding of the concept I have outlined here is required at an intellectual level in order to reject this physical intuition as it arises, to instead slow down and focus on your breathing in order to get the desired results. It’s about the length of time you remain in the fat burning zone, not how intense the activity was. It may also preferable to do walking and hiking as alternatives, or when at the gym, to use a low impact elliptical machine or to walk on a treadmill with a slight incline.

A final point to understand is that everyone has a different point where their body switches from fat to carbs as the preferred source of fuel. Those really lean people you see that seem to lose fat easily from physical activity tend to have a higher threshold where their body continues using fat as fuel. Their bodies are either better at being oxygen abundant at higher levels of intensity, or that the metabolism process for fat requires less oxygen overall. Nonetheless, while you are deep into burning carbs, they may still be burning fat, easily melting the fat off their body while you huff and puff for little physical change in return.

FILL OUT THE FORM BELOW TO GET STARTED.

Take your first step towards achieving the lifestyle you want.